Catherine, for one was my first puzzle-only game that I played and it was totally worth it to spent much time to figure out how to climb each tower to gain your freedom from nightmare that haunted you every night. It was here, fortunately (or unfortunately) that I learnt to control my rage while playing a game. “You definitely can’t solved any puzzle if you on rage.” that was I’m thinking when played Catherine. Of course you not only need a wit to survive the puzzle, you also have to be swift in later stages. I can stop thinking of Catherine, the game not the Catherine but then again a brilliant performance of Laura Bailey made Catherine as a great seductress. 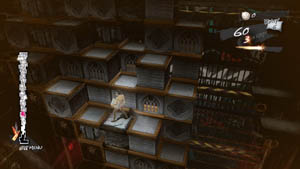 The game start off with Vincent, your standard bachelor guy and his girlfriend, Katherine. One day, Katherine pushed Vincent to proposed her which Vincent is still indecisive. Later that night, Vincent decided to lay off with his friend at a bar and that when the news of a person is mysteriously murdered while in their sleeps which of course, he clearly reject them. After a while, Catherine came to him seemingly to seduce him. Later that night he was in a tower like where he need to ascend them to stay alive according to a sheep in his dream. At first it was seems to be confusing but the after a while I felt the mysterious inside the game easily grasped. The story though, while it was not suitable to all ages, the story does pressurized you, not only as Vincent Brooks, but also you as a person to make a decision. As it was proved on which ending you get which is a plus in replayability value, represented by both Chaos; most darker side of you and Law; the light upon you. Unsurprisingly, as most of Atlus games, Catherine touched the religion issue although not as much as Shin Megami Tensei series. 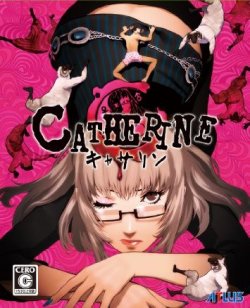 Other than the decision you make once you a top of every sub-level, you also can help your “colleague” both in the dream world and the real world as it is you who decide their fate in the dream world depend on whether you give a good answer to the question your companions ask. There are also mini-game inside the bar called Rapunzel, which is loosely based on the main game itself and provide you as training ground for the actual main game. To help your adventure while in the nightmares, you can drink on bar and when your finishing your drink, a nice trivia will pop-up which is great. While on the bar, you can also sneakingly see a sexy picture of Catherine which is also depend on your reply to her message which was an ingenious point in the game as you not only have to make a chaos/law decision while in the nightmare but also on the day. After you beat the game, for the several times I guess, you can accept the Tower of Babel challenge which is the most challenging part of the game. Although it has no boss fight whatsoever, time is essential for you to solve the puzzle presented apart from its random layout.

I believed Catherine, to me, deserve to be awarded as 2011 game of the year. Not only because of the gameplay but also on its originality that lead to Catherine its success. For this sole reason, I urged anyone who haven’t played Catherine to buy it and to who has played it to play them again. There a time I felt the game is cheap, but at the same time, it excites me that the game is challenging in every aspects.